This is the longer version of the blog post (i.e., all the gory miserable details) reporting on the latest hang-up in the 3 years and 6 months process of getting better microscopes custom-designed and custom-built to replace the current “universal” scopes.

My commitment (has not changed!):

The new enhanced microscopes HAVE to be right! There is no place in my world for scopes that do not meet the quality and operational standards I and you (my customers and distributors) require. Micro-Metrics has always had a reputation for quality and accuracy: this is the fundamental basis for this company, and when I inherited Micro-Metrics in 2011, it became (and remains) the basis for all I do.

I am willing to invest time (and money) to get these scopes right; I am not willing sacrifice quality to get them sooner (or cheaper). Though it has taken an insane amount of time – until the scopes are RIGHT, they aren’t acceptable (and, alas, neither are they available for you). Micro-Metrics and the sourcing company are committed to doing whatever it takes to make the new enhanced scopes right. Finding a reliable maker has turned out to be a lot harder than either of us imagined!

As of August: we have taken the following steps:

My sourcing company president IS good and honorable and working hard on this project (and is nearly as frustrated as I am). This is not something he is doing wrong or not following up on. Most things I've turned my hand to have turned out good or better. This upgrade? It will turn out good, because I won’t be done until it is! The original factory did a great job (and was worth the large cost) of designing the custom scopes (a truly esoteric skill), but they turn out to be less-good (well, pretty much unacceptable) at the actual manufacturing.


The gory miserable details (or, maybe this is just me whining?):

(Shall I start the tale back in April 2012, when I first contacted my sourcing company? Maybe not.)
(How about in December 2014, when I paid (a choke-the-horse amount for) the first-half for production? Maybe not even back then.)
How about…

This past May (2015), the factory (finally!) shipped samples of the “completed, all-done, just one last review and check before we ship the whole order” scopes (which then got hung up in Chinese Customs because they had done the wrong paperwork). When the samples arrived, my sourcing company kept some to test, and sent on to me 20 of the English-reticle scopes (in early-August).

What went wrong in the “done” versions:

English scopes: The 20 samples of (the 600 “all-done”) English scopes that I tested measured great: clear and accurate – just what I wanted! (I check every scope in every gauge against NIST-certified gage blocks.) However, 3 of the 20 had the internal optics rattling around, completely loose, inside the barrel! (This was a problem we raised with the factory with the second-to-last prototype back in, maybe, last October?! (Maybe earlier?) The factory said, “check the drawings; the optics will be glued in the finished scopes.”) Well, they glued the bottom optic and the eye piece to the barrel, but when I forced two of the three “rattlers” open – one had the reticle and retaining ring completely loose; the other had those two PLUS the two bottom optic lenses loose. I didn’t even bother to try to open the third “rattler.” 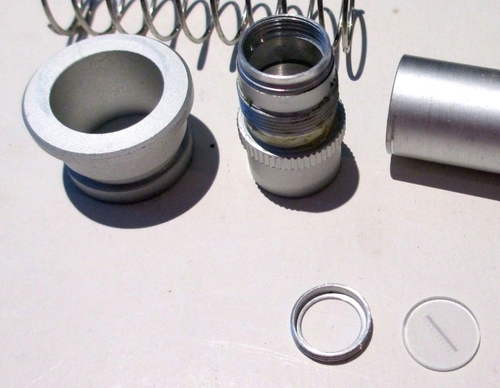 So, it has now been 3 years and 6 months that I've been working on getting the enhanced scopes. I am truly sorry it’s taking still more time – I truly believed, this past December, that we were close to finally getting the enhanced scopes. I hope the new factory will make the (solid, well-done, accurate) metric microscopes, so we can have them take on the English scopes, and we’ll finally get the new scopes!

There will be two new programs laid out on the new website (which will be posted when I get the scopes): the first is the “scope-swap” program: customers with the current universal scope can send in their gauges to have the scope replaced with the new enhanced version. I will be giving a (large) discount on the cost of the scope, and not charging any labor.

The other new program, once I get the new scopes, is a “body-transplant”: if you have an old metal or plastic gauge with the old-style scope, you can have your gauge rebuilt (with the new metal body) using your current scope.

Please note: if your OG204 Tooke Gage has a green plastic body, I am still replacing those shells under warranty.
Email me!)

Thank you for your patience during this oh-so-long process.